One of the world’s youngest and “greenest” fleets

Norwegian has one of the youngest and modern aircraft fleets, with an average aircraft age of 3.6 years. These new aircraft are fuel-efficient and not only good for the environment, but also for customers’ wallets.

The airline has an all-Boeing fleet with three aircraft types – the 787 Dreamliner for all long-haul flights from London Gatwick, the 737-800 for all European flights and this year, Norwegian was the European launch customer of the 737 MAX-8, which operates flights between Ireland, Northern Ireland, Scotland and the U.S.

Today, Norwegian’s fleet comprises of 145 aircraft. Several aircraft have already been phased out to accommodate newer, more fuel efficient and environmentally friendly aircraft. Norwegian will continue to renew its fleet in 2018.

In late 2015, Norwegian was named the Most Fuel-Efficient Airline on Transatlantic Routes by the International Council on Clean Transportation (ICCT), a unique study that compared the fuel efficiency, and therefore also carbon intensity, of the top 20 airlines operating transatlantic routes between Europe and North America 2014.

Norwegian’s 737 aircraft operate with an all economy configuration, whereas the 787 Dreamliner also offers a Premium cabin and passengers can enjoy a dedicated Premium check-in counter, additional luggage allowance, fast track security, lounge access, priority boarding, over a metre of leg room and all meals and drinks. Premium fares to the U.S. from London Gatwick start at £399 one-way, including taxes.

Norwegian has been awarded the ‘World's best low-cost long-haul airline’ for three consecutive years at the SkyTrax World Airline Awards as well as being named Airline of the Year at the CAPA Aviation Awards for Excellence. 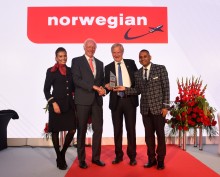 The Gulliver’s Travels author takes to the skies 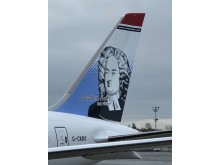