The Gulliver’s Travels author takes to the skies

Norwegian has announced that Jonathan Swift will become its second Irish tail fin hero, with the celebrated author’s portrait to appear on the tail of the airline’s aircraft that will serve the new transatlantic routes from Cork, Shannon and Dublin to the US East Coast.

Norwegian has always honoured iconic figures on the tails of its aircraft, featuring personalities who symbolise the spirit of Norwegian through innovation, challenging the norm and inspiring others. To reflect Norwegian’s rapid growth and new routes from Ireland, the airline has begun a series of Irish tail fin heroes. Jonathan Swift will become Norwegian’s second Irish hero, following legendary explorer Tom Crean who was announced earlier this year.

Born in Dublin in 1667, Jonathan Swift was a poet, author and journalist best known for his satirical novel Gulliver’s Travels and for his satirical essay on the Irish famine ‘A Modest Proposal’. Swift studied at Trinity College in Dublin before spending time in England where he wrote A Tale of a Tub published in 1704. During this time Swift also decided upon a career in the clergy and was ordained as a priest in the Church of Ireland.

His greatest known work - Gulliver's Travels, a book of fantasy, satire, and political allegory -, was written in 1725 and published in 1726. The book was a great success and contributed to Swift's fame and legacy as a writer and social commentator.

Norwegian Chief Commercial Officer Thomas Ramdahl said: “As Norwegian prepares for rapid expansion in Ireland this summer, our ‘tail fin heroes’ offer us a perfect chance to pay tribute to some of the greatest Irish figures of all time. Jonathan Swift has inspired generations with his great works, so we are honoured to have him appear on our aircraft.”

The portrait of Jonathan Swift, which will be used to adorn the tail of a Norwegian aircraft, has been taken from an oil painting of the author by Charles Jervas painted in 1875. The portrait is in the collection of the National Gallery of Ireland, which will celebrate a reopening of the Historic Wings on the 15th June with a two-week summer highlight festival. Read more about summer events here.

Sean Rainbird, Director of the National Gallery of Ireland said: “We are thrilled to have the National Gallery of Ireland’s portrait of Jonathan Swift by Charles Jervas reproduced as one of Norwegian’s tail fin heroes. Norwegian’s new Irish routes will help bring the likeness of this master writer and satirist out of the Gallery to a new audience at home and abroad.”

From July, Norwegian will launch a series of new low-cost transatlantic routes from Cork, Shannon and Dublin. The flights will serve smaller airports on the US east coast which offer good access into the New York, Boston and New England areas but carry significantly lower landing charges, allowing Norwegian to offer some truly affordable fares.

Summer Highlights at the National Gallery of Ireland

This summer we celebrate the reopening of the National Gallery of Ireland on Merrion Square together with a new presentation of the collection. A two-week festival to mark our reopening will include an exciting line up of exhibitions and events.

From Thursday 15 June, we will welcome visitors back into the newly refurbished and modernised spaces of the Dargan and Milltown wings.

Our new presentation of the permanent collection can now be enjoyed in the beautifully restored gallery spaces of the Dargan and Milltown wings with paintings, sculpture and objets d’art from the Irish collection, National Portrait Collection and European collections.

Admission is free to the permanent collection.

Vermeer and the Masters of Genre Painting: Inspiration and Rivalry. 17 June – 17 September 2017

Advance ticket booking is now open for the upcoming exhibition, Vermeer and the Masters of Genre Painting: Inspiration and Rivalry. Go to www.nationalgallery.ie.

The exhibition, which has seen record numbers at the Paris venue, opens in the National Gallery of Ireland on Saturday 17th June and runs through to 17th September 2017. It will be the major Old Master exhibition in Europe this summer coinciding with the reopening of the Gallery’s refurbished historic wings and new display of the permanent collection.

Norwegian has celebrated taking delivery of its 150th aircraft from Boeing, a 787-9 Dreamliner adorned with the Jonathan Swift tailfin hero, a celebrated Irish author. 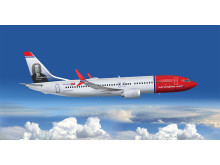