Economy, Finance See all public content for the subject

Norwegian (NAS) today reported its fourth quarter and full year 2011 results. The company experienced a passenger growth of 20 percent and carried 15.7 million passengers in 2011. The load factor increased by 2 percentage points to 79 percent.

Norwegian wins new major contract with the Norwegian Armed Forces for domestic and international travel. The contract will take effect as of January 2012 and is valid for three years. The Armed Forces is Norwegian's single largest customer today and the Defence Contract is the largest contract airlines compete for in Norway.

Norwegian has entered into a Letter of Intent to lease a further new Boeing 787-8 Dreamliner, bringing the total number of such aircraft on order to six. The six aircraft are part of Norwegian’s set up for long haul operations.

Norwegian Air Shuttle ASA has mandated ING on a USD 550 million financing facility. The facility covers term financing for 11 Boeing 737-800 HGW which are scheduled for delivery between summer 2011 and end of 2012 and pre-delivery financing for aircraft delivering during the same period. 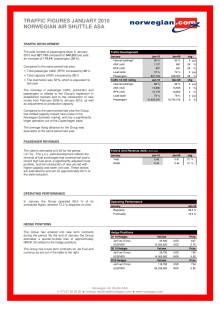