Norwegian’s brand new 737 MAX offers up to 189 seats and a longer range which allows the airline to serve smaller cities on both sides of the Atlantic and offer truly affordable fares. The airline always honours iconic figures on the tails of its aircraft, featuring personalities who reflect the spirit of Norwegian through innovation, pioneering achievement and inspiring others.

Sir Freddie Laker was born in Canterbury in 1922 andhad a long career in aviation, working for aircraft manufacturer Short Brothers, delivering military aircraft during World War Two, and setting up several airline ventures post-war. Sir Freddie was best known for founding Laker Airways and the ‘Skytrain’ service which first took to the air in September 1977, offering flights from London Gatwick to New York JFK for the then ground-breaking fare of £59.

Laker was a popular public figure and knighted by the UK Government in 1978 for services to the airline industry. As one of the first people to challenge established airlines by applying a ‘low-cost’ model to air travel, Laker set the template for the many ‘low-cost carriers’ that dominate modern-day aviation – his pioneering approach also coming long before the huge benefits of efficient new aircraft, the internet marketplace and more liberalised industry that modern airlines can now take advantage of.

Sir Freddie’s legacy has been a clear inspiration to Norwegian’s own low-cost long-haul growth which has now expanded to more than 50 transatlantic routes between Europe and the U.S. Last month, Norwegian launched 12 new routes from the UK and Ireland to the US East Coast, using the brand-new Boeing 737 MAX aircraft.

Thomas Ramdahl, Chief Commercial Officer said: “It’s fantastic to see our first Boeing 737 MAX and Sir Freddie Laker take to the skies. Sir Freddie Laker is truly an inspirational figure to Norwegian’s model of offering affordable fares to everybody, so it is a great honour to have him adorn our aircraft and become our first British tail fin hero on the 737 MAX.” 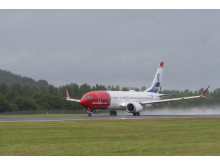 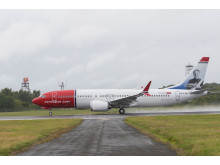 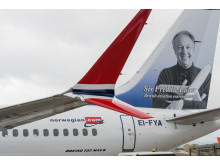 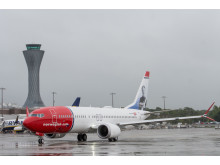