Norwegian reports record passenger figures in May. Almost 1.9 million passengers flew with Norwegian in May, which is the highest number of passengers the company has carried in a single month. The total on-time performance was 90.1 percent. With an on-time performance of as much as 94.5 percent, the Helsinki base reports in at first place, closely followed by Bergen and Alicante.

Norwegian carried a record 1,885,648 passengers in May, an increase of 342,925 (22 percent) compared to May last year. The previous passenger record from July last year was beaten by 65,000 passengers.

The seat capacity (ASK) was up 33 percent and the passenger traffic (RPK) was up 34 percent. The load factor was 77 percent, slightly higher than the same month previous year.

“I’m very satisfied that so many passengers choose to travel with us and that we are able to fill our aircraft even with strong capacity growth. More and more new passengers have flown with us this month, which means that Norwegian is gaining a stronger foothold in Europe. When launching new routes in new markets, the prices may be influenced; however, it is necessary to attract new customers. Once people have travelled with us, we know they will return to become faithful customers of Norwegian,” said CEO Bjørn Kjos. 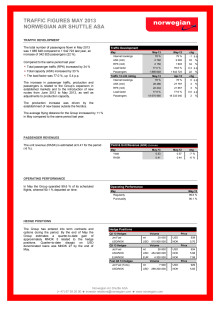