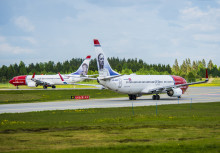 Norwegian reports record passenger figures in May. Almost 1.9 million passengers flew with Norwegian in May, which is the highest number of passengers the company has carried in a single month. The total on-time performance was 90.1 percent. With an on-time performance of as much as 94.5 percent, the Helsinki base reports in at first place, closely followed by Bergen and Alicante.