Norwegian’s (NAS) passenger growth continued in July, resulting in one of the best months in the company’s history. More than 1.8 million passengers flew with Norwegian in July, up 14 percent from the same month last year and the highest ever passenger figure.

“I am very pleased with July’s traffic figures. The development is positive in all of the Nordic countries in which Norwegian operates. The new passenger record shows that the combination of brand new, more environmentally friendly aircraft and a good route network is appreciated by our passengers,” said Norwegian’s CEO Bjørn Kjos.

The company operated 99.9 percent of its scheduled flights this month, whereof 78.8 percent departed on time. The on-time figures are heavily influenced by Norway’s civil aviation authorities’ (Avinor) inability to staff a sufficient number of air traffic controllers during the busiest holiday season. 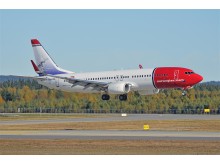 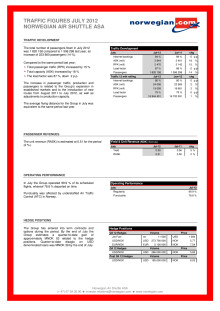