Norwegian (NAS) today reported a pre-tax profit of almost 900 million NOK. This is the company’s best ever result, an improvement of 187 million NOK from previous year. New aircraft have saved the airline 28 million NOK in fuel costs compared to the third quarter in 2011. However, these savings are offset by an additional bill of 25 million NOK – a result from Avinor’s (Norway’s civil aviation authority) lack of air traffic controllers at airports in Norway.

“We are very pleased with our best ever result. The figures also show that the growth has been well adapted to the market demand. The load factor is high and the growth in passenger traffic is very good,” said Norwegian’s CEO, Bjørn Kjos.

“We’ve had a number of necessary costs this quarter related to the establishment of new operational bases in Thailand and Spain, as well as increased production in Denmark following the bankruptcy of Cimber. We are prepared for costs related to the company’s growth, but we are not prepared to accept the bill from Avinor when they lacked air traffic controllers this summer,” said Kjos.

New bases of operations outside Scandinavia

Norwegian continues to phase in new aircraft; 13 Boeing 737-800s in 2012 and 14 in 2013. This opens up new opportunities for growth outside Scandinavia. Norwegian has decided to establish two new bases of operations: At London Gatwick and Alicante, Spain. See separate press release. 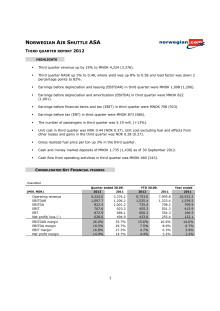