Norwegian Air Shuttle will establish a new base of operations at London’s Gatwick Airport in spring 2013. It will also establish a new base of operations at Alicante, Spain. Norwegian will offer flights to several Mediterranean destinations and the Nordic region from London. The new base in England will also enable Norwegian to better meet the head-on competition from Asian and European carriers in the long-haul market.

Norwegian is already a significant player at London Gatwick. With more than 100 weekly departures between the Nordic region and London, the British capitol is Norwegian’s most popular destination outside its home market. The airline sees a major passenger potential in London and surrounding areas. The Alicante base will – in addition to already established bases at Malaga and Las Palmas – serve an important part of Norwegian’s Spanish traffic.

Norwegian is planning to start its operations at London Gatwick with three Boeing 737-800s and increase to four aircraft by the end of the year. The first flights will commence in spring 2013. Pilots and cabin crew will be recruited locally.

“By establishing a new base in London, Norwegian will be positioned to meet the future competition on short-haul routes within Europe as well as long-haul routes globally. Growth and volumes are necessary to stay competitive in the airline industry,” said CEO Bjørn Kjos of Norwegian.

Norwegian currently has bases of operations in Norway, Sweden, Denmark, Finland and Spain. A new base for the company’s subsidiary for long-haul flights is being established in Bangkok.

Norwegian (NAS) today reported a pre-tax profit of almost 900 million NOK. This is the company’s best ever result, an improvement of 187 million NOK from previous year. New aircraft have saved the airline 28 million NOK in fuel costs compared to the third quarter in 2011. 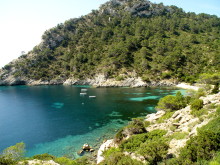 Norwegian Air Shuttle is launching its 14th new direct route from its new base at London Gatwick. Starting May 25th, the airline will fly once a week, on Saturdays, from London Gatwick to the popular Spanish island of Ibiza.