The airline carried 1,955,463 passengers in October, an increase of 308,525 passengers (19 percent) compared to October last year. The total capacity (ASK) increased by 36 percent and the passenger traffic (RPK) increased by 38 percent. The load factor was 79.3 percent, up one percentage point from the same month last year.

Bigger presence internationally
The traffic figures for October are influenced by new aircraft entering the fleet, the increase of seat capacity, the establishing of operational bases in Europe and the launch of several new routes. In addition, the flying distance is longer than before.

“I am pleased that more and more passengers choose to fly Norwegian and that the load factor continues to increase, even when increasing the seat capacity considerably. This proves that good quality at a low fare is important for passengers,” said Norwegian’s CEO Bjørn Kjos.

The company operated 99.7 percent of its scheduled flights this month, whereof 89.4 percent departed on time. 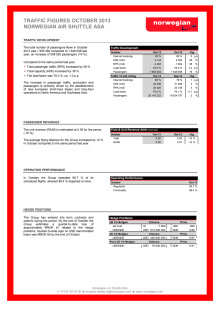