Norwegian carried more than three million passengers in April, an increase of 16 percent compared to the same month previous year. As expected, the figures were affected by Easter which was in March in addition to the launch of new long-haul routes.

A total of3,049,249 passengers chose to fly with Norwegian in April; 411,020 more than the same period last year. The total traffic growth (RPK) increased by 44 percent, while the capacity growth (ASK) increased by 51 percent. The load factor was 83 percent, down 3.6 percentage points. The high capacity growth is primarily due to the company’s long-haul routes, which has more than doubled since April last year.

The March and April figures were influenced by the Easter traffic, as also reported in previous month’s report.

“We have a strong passenger growth this month, despite the effects of the Easter traffic. Our load factor is solid, and the company’s long-haul capacity has grown considerably since the same period last year, with a record high growth of 311 percent outside the Nordics. As a result of the capacity increase we have offered a high volume of low fare tickets to attract new customers, consequently impacting the yield this month,” said CEO of Norwegian, Bjørn Kjos. 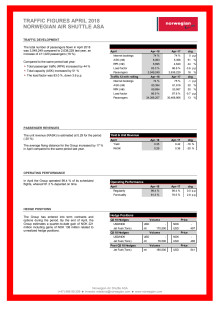