Norwegian has signed an agreement to lease an additional two new Boeing 787-9 Dreamliners, enabling the company to launch even more intercontinental routes. Both aircraft are scheduled to be delivered in 2018. With this new agreement, the company’s long-haul fleet will consist of 40 Dreamliners by 2020.

Norwegian continues to expand its international presence by signing an agreement with AerCap to lease two new Boeing 787-9 Dreamliner aircraft. Both aircraft are scheduled to enter service in 2018.

Norwegian CEO Bjørn Kjos said: “In order to offer customers more routes and make our intercontinental operation even more competitive, we are dependent on more brand new cost-efficient aircraft. Our intercontinental operation is crucial to the company’s global growth and the creation of new jobs. The Dreamliner is a great airplane with high passenger comfort, long range, low fuel burn and reduced emissions."

Norwegian currently operates eight 787-8 Dreamliners and one 787-9 Dreamliner. The company’s long-haul fleet will consist of 40 Dreamliners by 2020. In 2015, Norwegian was voted the most fuel-efficient transatlantic airline by renowned International Council on Clean Transportation. 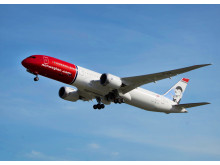