Norwegian experienced strong passenger growth last year and flew 18 per cent more passengers than the previous year. In total, 63 new routes were established; 30 in Denmark, 18 in Sweden and 15 new routes in Norway.

In December, Norwegian transported 815 562 passengers. This is an increase of 163 667 passengers or a 25 percent increase from the same month last year.

– With a total of 70 new Boeing 737-800 aircraft by 2014, Norwegian is set to have one of the most environmentally friendly fleets in Europe. December was another milestone in the company’s history when the number of passenger kilometers produced by new 737-800s exceeded the number of passenger kilometers produced by the company’s fleet of Boeing 737-300s which are currently being phased out. The new 737-800 aircraft also provide our passengers with a more comfortable flying experience, with more leg room and less noise, said Kjos.

The yield is estimated at 0.55 NOK for December, down 17 per cent compared to the same month in 2008. The development partially reflects the removal of fuel surcharges that covered last year’s fuel price, a significantly adjusted route portfolio, and the introduction of new aircraft with higher capacity and lower unit cost.

The cabin factor for the Group was 76 percent in December, up 2 percentage points from last year. The company operated 99.4 percent of the planned flights in December, whereof 61.8 percent departed on schedule. The on time performance for 2009 was 81 per cent.

– December was an extraordinary month when it comes to punctuality. The month was characterized by adverse weather conditions featuring extreme cold and heavy snow along the Norwegian coast and on continental Europe. This combined with many travelers before and during Christmas made staffing levels at the airports, and in particular at Oslo Airport, insufficient to cope with the high traffic volume. We have initiated a number of immediate initiatives to correct the situation, said Kjos. 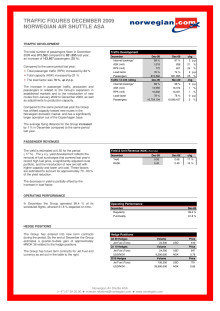