Norwegian has announced that renowned aviation entrepreneur and pioneer Sir Freddie Laker will become its latest British tail fin hero. Laker will be the first figure to appear on the new Boeing 737MAX aircraft launching this summer on new transatlantic flights between Europe and the US.

Norwegian has always honoured iconic figures on the tails of its aircraft, featuring personalities who symbolise the spirit of Norwegian through innovation, challenging the norm and inspiring others. To reflect Norwegian’s rapid growth in the UK, where it now flies 5.2 million UK passengers each year to over 50 destinations, the airline has begun a series of British tail fin heroes. Sir Freddie Laker will become Norwegian’s third British hero, following the author Roald Dahl and pioneering pilot Amy Johnson.

Born in Canterbury in 1922, Sir Freddie Laker had a long career in aviation, working for aircraft manufacturer Short Brothers, delivering military aircraft during World War Two, and setting up several airline ventures post-war. Sir Freddie was best known for founding Laker Airways and the ‘Skytrain’ service which first took to the air in September 1977, offering flights from London Gatwick to New York JFK for the then ground-breaking fare of £59.

Laker was loved by the public and knighted by the UK Government in 1978 for services to the airline industry. As one of the first people to challenge established airlines by applying a ‘low-cost’ model to air travel, Laker set the template for the many ‘low-cost carriers’ that dominate modern-day aviation – his pioneering approach also coming long before the huge benefits of efficient new aircraft, the internet marketplace and more liberalised industry that modern airlines can now take advantage of.

Sir Freddie’s legacy has been a clear inspiration to Norwegian’s own low-cost long-haul growth which has now expanded to more than 50 transatlantic routes between Europe and the U.S. Last month, Norwegian announced 12 additional routes from the UK and Ireland to the US East Coast, using the brand new Boeing 737MAX aircraft – Laker will become the first tail fin hero to feature on the new MAX aircraft when it takes to the skies this summer.

Norwegian CEO Bjorn Kjos said: “Norwegian continue to see huge growth in our transatlantic flights but we are standing on the shoulders of giants like Sir Freddie Laker who first pioneered the idea that travel should be affordable for all.

“Millions of passengers around the world owe a huge debt to Laker who first opened the door to the affordable fares we all now enjoy. We are honoured to have Sir Freddie as one of our tail fin heroes and it is especially fitting that he will be the first face on our brand new MAX aircraft serving new transatlantic routes between the UK, Europe and the US this summer.”

Freddie Laker Jr, himself a leading entrepreneur in the tech sector, said:"Norwegian is dedicated to bringing high quality and affordable air travel to everyday people - I have even heard Norwegian's CEO, Bjorn, described as the "Freddie of the Fjords”! The spirit of Laker Skytrain carries on with Norwegian and I know my father would be honoured by this recognition.”

Norwegian currently operates from four UK airports (London Gatwick, Birmingham, Manchester and Edinburgh) with new transatlantic services also starting this summer from Belfast, together with Cork, Shannon and Dublin in Ireland. Norwegian carries 5.2 yearly UK passengers to 50 global destinations, including the UK’s only direct low-cost flights to the US with 7 destinations from just £135 one way.

Norwegian is proud to announce that British author Jane Austen will become its latest ‘tail fin hero’. The renowned author’s portrait will grace the tail fin of a Norwegian Dreamliner aircraft, as 2017 marked the 200th anniversary of her death. 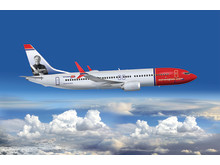