Norwegian is proud to announce that Scottish poet Robert Burns will become its first Scottish ‘tail fin hero’. The renowned poet’s portrait will grace the tail fin of a Norwegian Boeing 787 Dreamliner aircraft which will take to the skies later this Spring.

The announcement comes on Burns Night, an annual event to celebrate the life and work of Robert Burns on the anniversary of his birthday – 25th January. The first Burns supper was held in July 1801 when Burns’ close friends got together to mark the fifth anniversary of his death. The night included performances of Burn’s work and was such a resounding success they decided to hold it again, beginning the tradition of Burns Night!

Robert Burns, born in 1759, went on to become a globally renowned poet. His best-known work is ‘Auld Lang Syne’ which is now sung at New Year’s Eve celebrations across Scotland and other parts of the world. Other famous poems include To a Louse, To a Mouse and The Cotter’s Saturday Night.

Norwegian’s Chief Commercial Officer Thomas Ramdahl said: “Our ‘tail fin heroes’ offer us a perfect chance to pay tribute to some of the greatest Scots of all time. Robert Burns has inspired generations and as the world celebrates the anniversary of his birth, it is an honour to have one of the greatest poets of all time adorn our aircraft.”

Malcolm Roughead, VisitScotland Chief Executive, said: “Norwegian’s tail fin heroes are all about celebrating individuals who have inspired others and that is certainly true of Robert Burns, whose words have touched the hearts and minds of people the world over. As a cultural icon, Burns is a symbol of Scotland’s creativity, passion and pride. As we prepare to celebrate Burns Night we hope passengers of Norwegian are inspired to learn more about the birthplace of one of the world’s greatest literary legends.” 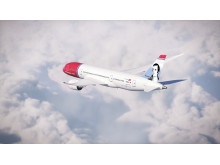