Norwegian’s second quarter results are characterised by reduced growth and improved profitability, in line with the company’s strategy. Despite the reduced production growth and grounding of the Boeing 737 MAX aircraft, the underlying operating result before ownership costs more than doubled from the same quarter in 2018.

The underlying operating result before ownership costs was more than NOK 2.3 billion, the highest ever in a second quarter and NOK 1.2 billion higher than last year. The unit revenue (RASK) increased by 13 percent, and the revenue per passenger per kilometer (yield) increased by 11 percent. For the second quarter, the total revenue was more than NOK 12 billion, an increase of 19 percent from the same period last year, primarily driven by intercontinental growth. Almost 10 million passengers flew with Norwegian this quarter, on par with the same quarter in 2018. The load factor was 88 percent, up 1.2 percentage points from last year.

Norwegian’s key priority is returning to profitability through a series of measures, including an optimised route portfolio and an extensive cost-reduction program. The production growth (ASK) in the second quarter was six percent, down from the peak growth of 48 percent in the second quarter of 2018. The company’s internal cost reduction program #Focus2019 continues with full effect and achieved cost reductions this quarter were NOK 554 million, consequently reaching the goal of NOK 1 billion so far in 2019.

“Norwegian’s Q2 results show that we are delivering on our strategy of moving from growth to profitability. Despite operational issues outside of our control, like the grounding of our 737 MAX fleet, we are delivering the highest second quarter operating revenue in the history of Norwegian. I am also pleased with the booking figures for the coming months, especially on long-haul,” said CEO of Norwegian, Bjørn Kjos.

During the second quarter, Norwegian has introduced four Boeing 787-9 Dreamliners to its fleet. With an average age of only 3.8 years, Norwegian’s fleet is one of the most fuel efficient and most modern in the world.

In March, Norwegian temporarily suspended operation of 18 Boeing MAX 8 aircraft. The company has combined flights, booked customers to other departures within Norwegian’s own network, consequently reducing the impact on passengers. The company will continue to limit passenger disruptions by also offering flights with wetlease companies whenever necessary.

The 737 MAX grounding has affected both demand, operating expenses and production negatively. Norwegian expects the negative impact on the 2019 results to be approximately NOK 700 million.

“Europe's Leading Low-Cost Airline” for the fifth consecutive year at the World Travel Awards in June.

Norwegian Reward, the award-winning loyalty program of Norwegian, was named “Program of the Year Europe & Africa” for the third consecutive year at the Freddie Awards in April.

«Best Low-Cost Carrier in Europe” at the Passenger Choice Awards™ in April. 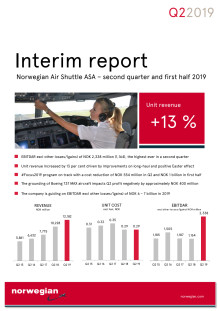