- Norwegian CEO: “Half a million passengers can’t be wrong – this proves low-cost long-haul can succeed”

Low-cost airline Norwegian has reached 500,000 UK passengers on its ground-breaking low-cost long-haul flights to the U.S.

Passenger Sam Holden, 29, from Dorchester this week became Norwegian’s 500,000th long-haul passenger as he boarded a flight from Gatwick to Boston. To celebrate the milestone, crew members presented Sam and his girlfriend with a free pair of Premium tickets for any Norwegian long-haul flight.

Passenger Sam Holden said: “I’m delighted to be Norwegian’s lucky passenger number 500,000! I plan to fly between the UK and US quite a lot over the next year so Norwegian’s low-cost flights are a great way to get to the States without breaking the bank.”

Norwegian uses state-of-the-art Boeing 787 Dreamliners on its transatlantic flights and the airline has further new Dreamliner aircraft on order that will more than quadruple its current long-haul fleet. Norwegian has also obtained a UK Operating License, allowing access to bilateral traffic rights to a series of new long-haul markets in the future including Asia, South America and Africa.

Norwegian CEO Bjorn Kjos said: "The cost of flying to America has been too high for too long and our transatlantic flights show there is huge demand for quality, affordable long-haul travel. Half a million UK passengers can’t be wrong and this milestone proves that low-cost long-haul travel can succeed.

“In less than two years our long-haul operation has taken-off with UK passengers, with new routes and additional flights being added all the time. This is only the beginning – with new aircraft orders and traffic rights to a range of new markets, we have ambitious plans to continue offering passengers high-quality low-cost travel.”

“The revolution continues with flights to Boston and Oakland and shows no sign of slowing up with a record number of long-haul routes from Gatwick due to be launched in the coming year.”

Earlier this year, Norwegian launched a record number of seats on its transatlantic routes, with 425,000 seats available on direct flights between the UK and U.S.

Norwegian is Europe’s third largest low-cost carrier. In the UK, Norwegian has grown to become the third-largest airline at Gatwick and also operates from Manchester, Birmingham, and Edinburgh. In 2015, Norwegian flew 3.9 million UK passengers to more than 40 destinations. 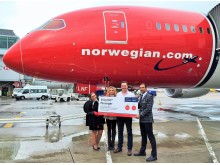 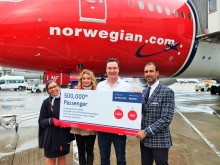 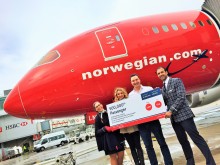