Norwegian’s passenger traffic, production and number of passengers in April were heavily disrupted by the closure of European airspace due to volcanic ash.

Norwegian Air Shuttle ASA, commercially branded “Norwegian,” is a public low-cost airline noted on the Oslo Stock Exchange. The company is the second largest airline in Scandinavia, and has a route portfolio that stretches across Europe into North Africa and the Middle East. With competitive prices and customer friendly solutions and service, the company has experienced significant growth over the previous years. With more than 10.7 million passengers in 2009, Norwegian is the 4th largest low-cost airline in Europe. The turnover in 2009 was in excess of NOK 7.3 billion. Norwegian currently operates 52 aircraft on 230 routes to 91 destinations and employes approximately 2 000 people.

Norwegian’s passenger figures were strongly affected by the unexpected closing of European airspace in April due to volcanic ash. Close to 2 000 flights were cancelled. A total of 800 000 passengers flew with Norwegian. The company had a production growth of 13 percent compared to April last year. 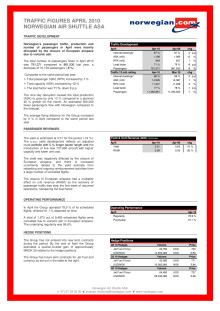