Norwegian's first long-haul flight took off from Oslo Airport Gardermoen Thursday afternoon, bound for New York’s JKF airport. “The launch of our intercontinental routes is an important milestone in Norwegian's history. Our goal is that even more passengers should afford to fly – also to other continents,” said CEO Bjørn Kjos.

“We are very happy for the great reception of our long-haul routes and that we finally - after years of planning - are able to welcome our first New York passengers on board. The market for intercontinental flights has long been characterized by artificially high fares and limited flexibility. The reception of our new long-haul routes shows that many want to fly inexpensively and comfortably to New York, Bangkok and Fort Lauderdale,” said CEO Bjørn Kjos. He also took the opportunity to announce that Norwegian will expand the number of weekly flights between Oslo and New York from three to four. From 29 November, Norwegian offers daily flights between New York and Scandinavia.

See photos from the launch attached.

Dreamliner delivery scheduled for late June
Norwegian's long-haul routes will be operated by an Airbus A340-300 from the European leasing company HiFly. Norwegian expects to take delivery of its first 787 Dreamliner in late June and enter long-haul service in August. Norwegian currently has eight Dreamliners on order, whereof three will be delivered in 2013, four in 2014 and one in 2015.

More launches this week
Norwegian's first intercontinental flight from Stockholm to New York takes off Friday afternoon, while the first Oslo - Bangkok flight takes place on Saturday. All the flights are full. 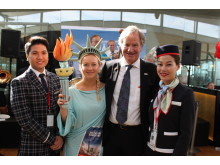 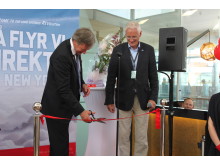