New domestic routes in Spain and routes between the Caribbean and the US had a positive effect on passenger figures in January. Norwegian carried more than 1.7 million passengers this month, a considerable increase compared to January last year. The load factor was 81.7 per cent, up 1.7 percentage points.

In January, Norwegian carried 1,756,656 passengers, an increase of 9 per cent compared to the same month previous year. The total passenger traffic (RPK) increased by 14 per cent and the total capacity (ASK) increased by 12 per cent.

Norwegian launched new routes from the French Caribbean islands of Martinique and Guadeloupe to Baltimore/Washington, New York and Boston. The service has been well received by customers in the Caribbean and the US, as well as Europeans connecting through New York. Norwegian has extended the season through April on selected routes due to the positive response.

Norwegian CEO Bjørn Kjos said: “We are very pleased that we have attracted more passengers and achieved a higher load factor in a traditionally slower month. The growth is primarily due to international expansion, with domestic flights in Spain and the routes between the French Caribbean and the US East Coast. In addition, more passengers are choosing Norwegian on intercontinental routes."

Norwegian is continuing its fleet renewal program in 2016, with the delivery of 21 brand new aircraft. A total of 17 brand new Boeing 737-800s and four 787-9 Dreamliners will be delivered in 2016. Norwegian will also take delivery of four Airbus A320 neos that will be leased out. In addition, seven older 737-800s will exit the fleet. With an average age of 3.6 years, Norwegian’s fleet is one of Europe’s newest and most environmentally friendly.

Norwegian operated 99.5 per cent of its scheduled flights in January, whereof 72.3 per cent departed on time. 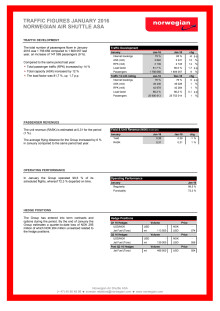