Norwegian today reveals that vegan meals are becoming more popular among its 37 million passengers flown each year, highlighting which routes are most popular for passengers on plant-based diets as Veganuary draws to a close.

Skytrax World’s Best Low-Cost Long-Haul Airline, Norwegian, offers affordable flights from London Gatwick to 12 US cities, Buenos Aires, Argentina and from 31 March, Rio de Janeiro, Brazil on brand new Boeing 787 Dreamliners. Customers have the flexibility to choose what best suits their travel needs including a meal service during flights. Norwegian offers a wide selection of meals that cater to all dietary requirements including vegetarian, lactose-free and gluten free options.

Europe’s third largest low-cost airline analysed more than 7330 long-haul flights to and from London Gatwick between January 2018 and January 2019 to identify where there is most demand for vegan meals.

More than 23,000 vegan meals have been consumed on board Norwegian’s long-haul flights to and from Gatwick since January 2018.

‘Veganuary’ took-off in the skies in January

The Veganuary campaign - run by a UK charity of the same name - encourages people to try a vegan diet, omitting meat, fish, dairy, eggs and honey from their diet for the month of January to promote health benefits.

Findings comparing January 2018 and January 2019 show that more vegan meals are being consumed on Norwegian flights in 2019 as ‘Veganuary’ takes to the skies.

Los Angeles is the vegan route for Norwegian

Findings show that vegan meals are most popular on Norwegian’s daily flights between London and Los Angeles - 55 per cent higher than the average across all Norwegian long-haul flights.

Oakland (San Francisco) is the second most popular route for vegan meals ordered on Norwegian – 31 per cent more than the average, highlighting the popularity of vegan meals on California routes.

Vegan meal orders on New York flights are lower in comparison, in line with the average across Norwegian’s long-haul flights, despite the airline operating more flights between London and the Big Apple than any other route, with up to three services daily.

Florida versus California – which state has more vegan passengers?

Norwegian serves three gateways to Florida and two destinations in California with more than 15 flights per week to each state. As traditional sun destinations, by grouping the routes together, findings clearly show that vegans are more likely to be found on flights to California.

Of Norwegian’s 14 long-haul routes from Gatwick, the least popular route for vegan meals ordered by passengers on plant-based diets were on flights between London and Buenos Aires.

Buenos Aires in Argentina, a country renowned for its high-quality steak, has 25 per cent fewer vegan meals ordered compared with the average across all long-haul routes.

Matthew Wood, SVP Commercial at Norwegian said: “We offer a delicious range of meals that meet all our customers’ dietary requirements and this analysis clearly shows that being vegan is just as easy at 35,000ft as it is on the ground.

“Veganism is taking to the skies and the increase in our customers choosing vegan meals clearly shows there’s a ‘Veganuary effect’ taking-off.”

Elena Orde at The Vegan Society said: “We’re very pleased to see Norwegian providing vegan options on-board their flights at a time when veganism is growing so much.

“Not only is this great in terms of inclusivity, but vegan food generally has a lower environmental impact and can help airlines to meet their carbon saving targets.

“It is not uncommon for us to hear stories from vegans who had poor experiences on flights, being left only with snacks such as peanuts or crisps.

“We would love to see airlines really embrace the variety and creativity that is possible with vegan food, and to create options that are suitable for vegans but appeal to everyone.”

Rich Hardy, Head of Campaigns at Veganuary said: “It’s fantastic to have an airline, like Norwegian, not just provide great vegan options for travellers, but also put the time into analysing which routes have the highest demand for vegan food. The research provides a fascinating insight into the way veganism is spreading on a global scale and how the modern-day vegan can be catered for whether they’re in the air or on the land.”

A vegan menu on board Norwegian could include gnocchi covered in a Mediterranean vegetable & tomato sauce with black olives or a chickpea stew with roasted baby aubergine and broccoli in a harissa sauce.

Norwegian’s three-course meal service can be pre-ordered for £25 per person, per flight during the booking process or it’s included as part of a LowFare Plus booking, which also includes free seat reservation and a 20kg checked bag at www.norwegian.com/uk

Norwegian will commence the UK’s cheapest nonstop flights to Brazil with a brand new four-weekly service from Gatwick to Rio de Janeiro on 31 March. The airline will also begin services to San Francisco and Miami on 31 March.

Launched in the UK in January 2014, Veganuary (pronounced vee-GAN-uary) is a registered charity that encourages people to try vegan for January. Veganuary is dedicated to changing public attitudes, while providing all the information and practical support required to make the transition to veganism as easy and enjoyable as possible. Take the Veganuary pledge here

About The Vegan Society

The Vegan Society is the world’s oldest vegan society whose co-founder Donald Watson came up with the word ‘vegan’ in 1944. It’s a registered educational charity (no. 279228) that provides information and guidance on various aspects of veganism, including to existing and potential vegans, caterers, healthcare professionals, educators and the media. If you are interested in learning more about veganism, download our new VeGuide app now. 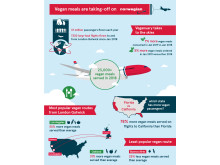