Norwegian reported its highest ever passenger figures in a single year with almost 26 million passengers in 2015 and a load factor of 86 per cent. The company’s long-haul operation contribute considerably to the growth.

Passenger growth, more new aircraft and high load factors characterised 2015. The company carried 25.7 million passengers in 2015, 2 million more than the previous year. The company took delivery of 11 brand new aircraft and launched several new routes, particularly long-haul services. It also launched domestic services in Spain and connected the U.S. East Coast with the French Caribbean. The 2015 load factor was 86 per cent, up from 81 per cent in 2014.

Norwegian received several international customer awards in 2015, including “World’s best low-cost long-haul airline” by SkyTrax. Norwegian was also named the most fuel-efficient transatlantic airline by The International Council on Clean Transportation thanks to its brand new Boeing 787 Dreamliners.

December 2015 was characterised by passenger growth and a solid load factor. Norwegian carried almost 1.7 million passengers in December, up 9 per cent from the same month last year. The capacity growth (ASK) in December was 12 per cent and the traffic growth (RPK) was 15 per cent. The load factor was 83.3 per cent, an increase of 2 percentage points.

Norwegian CEO Bjørn Kjos said: “We are pleased that more and more people have chosen to fly with us, especially in the new destinations where we have introduced our service. Even with the launch of a number of new routes, we have still been able to fill our planes better than before. Our long-haul operation has stabilised and contributed significantly to the 2015 figures. It bodes well going forward, as it increases our global competitiveness and positions us for further growth at London Gatwick.

“In December, many Scandinavians and Europeans have chosen to travel, either home for Christmas or to their favorite vacation getaway. Our new routes from London and Scandinavia to the Caribbean have been very well received. Our new routes from Boston, New York and Baltimore / Washington to the French Caribbean islands of Martinique and Guadeloupe have also been well received,” said Kjos.

Norwegian operated 99.4 percent of its scheduled flights in December, of which 76.4 per cent departed on time. 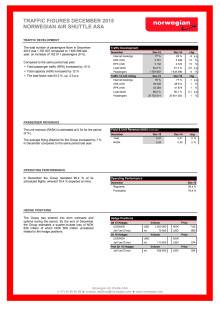