Norwegian today reported its first quarter results for 2016 with an underlying improvement of more than 400 MNOK (£34m), compared to the same quarter previous year. The company’s intercontinental and Nordic routes had a positive impact on the results. The load factor was record high at 85 per cent, in a quarter that is traditionally considered low season.

The pre-tax result (EBT) was -992 MNOK, compared to -777 MNOK the same quarter previous year. Included in the 2016 figures are negative currency effects and losses from forward jet-fuel contracts, amounting to a loss of 528 MNOK.

The load factor for the first quarter was 85 per cent, up two percentage points compared to the same quarter last year. The airline carried close to six million passengers in the first quarter, an increase of 17 per cent. Norwegian’s strongest growth was at London Gatwick, where the airline operates both long- and short-haul routes. The growth at Spanish airports is also considerable. In the Nordic countries passenger numbers increased, both in regards to total number of passengers and market shares.

CEO Bjørn Kjos said: “The first quarter results show that we have an underlying profit improvement of 400 million NOK compared to the same quarter last year. Our load factor continues to be very high. The long-haul operations are becoming significantly more important. We also see growth in the Nordics and in Europe in general. We also see that the Scandinavian and European route networks both play an increasingly important role in our long-haul strategy, as many of our passengers connect from short haul to long haul and vice versa. An increasing number of business travellers choose to fly with Norwegian, and we have entered into agreements with several large corporations in the first quarter. This indicates that passengers appreciate a high quality product at a low price.”

In the first quarter, Norwegian launched new long-haul routes between Paris and the US, and took delivery of five brand new Boeing 737-800 and one Boeing 787-9 Dreamliner. 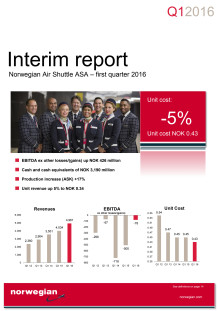