Norwegian reports strong passenger growth in April, due to the opening of two new bases in England and Spain, and the launch of several new routes. The company carried more than 1.7 million passengers this month, an increase of 364,986 (27 percent) passengers compared to the same period previous year. Norwegian´s passengers travel longer distances than previously, which resulted in a traffic growth (RPK) of 36 percent. The total capacity increased by 40 percent.

Norwegian carried 1,710,279 passengers, up as much as 27 percent compared to April last year. The seat capacity (ASK) was up 40 percent and the passenger traffic (RPK) was up 36 percent. The load factor was 73.6 percent, down 2.2 percentage points.

April´s traffic figures was affected by the fact that Easter was in March this year and in April last year. In addition, Norwegian launched several new routes and increased its capacity considerably. The number of routes in Finland and Denmark was almost doubled compared with April last year. Production was also increased considerably in Norway and Sweden. Norwegian now offers 10 new routes from London Gatwick, most of which are direct routes to the European continent and the Mediterranean. In April, Norwegian had 10 more aircraft in operation than the previous month.

“I´m pleased that the new routes we have opened in new markets have been so well received. The traffic development this month is as expected and in line with our strategy of establishing ourselves in new markets to meet the strong competition in the European airline industry. In a start-up phase we anticipate strong production and passenger growth as well as lower launch fares on new routes. It is important that passengers in new markets try Norwegian. When they become familiar with our product and service they will become faithful customers,” said Norwegian´s CEO Bjørn Kjos.

Norwegian operated 99.6 percent of the scheduled flights in April, where of 89.3 percent departed on time. 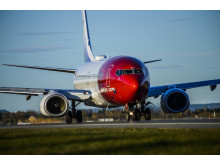 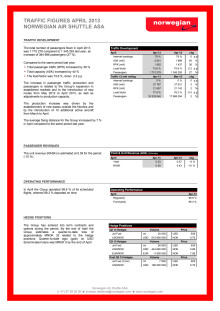