Norwegian carried 1,996,311 passengers in April, an increase of 17 percent compared to the same month last year. The total passenger traffic (RPK) increased by 49 percent, while the capacity (ASK) increased by 37 percent this month. The load factor was 79.8 percent in April, up 6.2 percentage points.


“I’m very pleased that we despite the strong capacity growth this month keep attracting customers and continue to fill our aircraft even better than we did the same period last year. Norwegian’s on-time performance is almost 90 percent, once again making us one of most punctual airlines in Europe in terms of on-time performance,” said Norwegian’s CEO Bjørn Kjos. 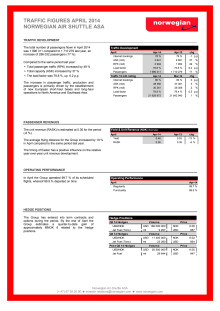