Norwegian (NAS) today reported December 2011 traffic results. The company reported a solid passenger growth of 211,000 (22 percent), marking the end of a year of major growth. A total of about 16 million passengers travelled with Norwegian in 2011, an increase of 3 million compared to the previous year.

The airline flew 1,177,679 passengers in December and reported a total RPK growth of 24 percent. The load factor was 77 percent, up 1 percentage point from December 2010.

“We are very pleased with the December traffic figures which show a reassuring trend as the overall seat capacity increased by 22 percent and our load factor rises. Much of this capacity increase is due to our entry into the Finnish market and the launch of several new routes both in Finland and Sweden. Our passengers still pay the same low fares as previous year, even with considerably higher oil prices. We manage to keep low fares through better capacity utilization and the introduction of several new and far more cost-efficient aircraft to our fleet,” said CEO Bjørn Kjos at Norwegian.

Norwegian has taken delivery of 16 brand new aircraft in 2011 and is one of the fastest growing airlines in Europe.

“Growth and market shares have no value unless the growth is profitable. We’ve worked strategically to grow profitably and adjust capacity to the market. The 2011 traffic figures confirm that our capacity has been well adapted to the demand,” said Kjos.

In order to be reliable, an airline needs to have both a good flight punctuality and regularity. The latter refers to the percentage of completed scheduled flights – or the lack of flights cancelled.

Norwegian’s overall punctuality in 2011 was 85.2 percent and the percentage of completed flights 99.7, making Norwegian one of the top major airlines in terms of both flight punctuality and regularity.

Norwegian Air Shuttle ASA, commercially branded “Norwegian,” is a public low-cost airline noted on the Oslo Stock Exchange. The company is the second largest airline in Scandinavia, and has a route portfolio that stretches across Europe into North Africa and the Middle East. With competitive prices and customer friendly solutions and service, the company has experienced significant growth over the previous years. With more than 13 million passengers in 2010, Norwegian is the 3rd largest low-cost airline in Europe. Norwegian currently operates 61 aircraft on 297 routes to more than 100 destinations and employs approximately 2 500 people. 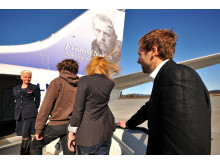 Passengers entering a Nor... 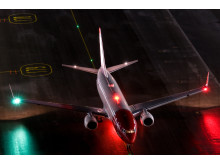 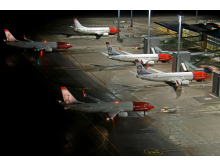