Norwegian’s 2015 results are characterised by high load factors, continued fleet renewal and moderate capacity growth. The company reported a high load factor throughout 2015, which averaged at 86 per cent. The pre-tax result improved by 1.7 BNOK (£137 million), compared with last year.

The company’s total revenue was 22.5 BNOK (£1.8bn) - an increase of 15 per cent. The production growth (ASK) increased by 5 per cent, which illustrates a breather in the company’s expansion, explained by phasing out older aircraft whilst adding new aircraft to the fleet. The load factor remained high at 86 per cent in 2015, up 5 percentage points from the year before. Norwegian carried close to 26 million passengers in 2015, an increase of 7 per cent from 2014.

For the fourth quarter, the underlying result increased by approximately 500 MNOK. The net loss before tax of 703 MNOK was mainly related to fuel hedging for 2016 and the depreciation of the Norwegian krone. By transferring Norwegian’s fleet to its subsidiary Arctic Asset Aviation Ltd. (AAA), the value of the aircraft has increased in line with the dollar. This has had a positive effect of 88 MNOK on the equity for the fourth quarter and 421 MNOK for 2015.

The company’s total turnover in the fourth quarter was 5.3 BNOK, an increase of 16 per cent from the same quarter in 2014. Whilst the international traffic increased by 19 per cent, domestic Scandinavian routes also improved with an increase of 5 per cent. With few empty seats the load factor increased by 4 percentage point to 85 per cent.

The airline carried 6.13 million passengers during the fourth quarter, which represents a passenger growth of 9 per cent.

“We enter 2016 with favorable fuel costs and one of the youngest fleets in Europe, which presents a significant competitive advantage. We see a good demand for quality flights at affordable fares, but the unpredictable political decision to introduce passenger tax in Norway is creating an uncertain situation in this market. It is a paradox that the company with the lowest emissions seems to be punished the hardest,” says CEO Bjørn Kjos. 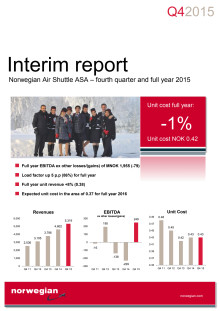