Norwegian today reported its third quarter results for 2015 with a pre-tax result (EBT) of 1.1 billion NOK (£87million), a strong improvement from the same quarter previous year. The company’s long-haul operations and international routes have a positive impact on the results. The load factor is at a record high of 91 per cent.

The pre-tax result was 1.1 billion NOK, a strong improvement from 505 MNOK (£43.5million) in the same quarter last year. The load factor for the third quarter was 91 per cent, up six per cent.

The airline carried 7.7 million passengers this quarter, an increase of 9 per cent. The long-haul passenger growth was 15 per cent, compared with last year’s third quarter result.

Norwegian’s strongest growth in terms of passenger numbers was at London Gatwick, where the airline operates both long- and short-haul routes. The growth at Spanish airports is also considerable. In the Nordic countries passenger numbers are stable, with a slight increase in market share.

Norwegian CEO Bjørn Kjos said: “The third quarter results show that Norwegian’s long-haul operations and international routes are becoming significantly more important. This is where we see most of the future growth potential, enabling the company to compete in a global market with strong competition.

“UK activity has played a crucial role in a strong third quarter for Norwegian, with Gatwick seeing our biggest overall growth in passenger numbers. With new aircraft and new routes planned, expansion in the UK will continue to be at the forefront of our long-term plans.

“We also see growth in Europe in general, while the Scandinavian market is stable. The Scandinavian and European route networks play an increasingly important role in our long-haul strategy, as many of our passengers use connecting flights with Norwegian.”

The UK will be a key market in Norwegian’s future expansion plans - growth and activity in the UK during the third quarter has included:

1 YEAR ANNIVERSARY OF LOW-COST TRANSATLANTIC TRAVEL - July marked the 1 year anniversary of Norwegian’s ground-breaking low-cost transatlantic flights from Gatwick to New York, Los Angeles, and Fort Lauderdale. Since they were launched in July 2014, load factors have been in excess of 90 per cent

BOSTON BOOST AS NEW LOW-COST US ROUTE ANNOUNCED - July also saw Boston announced as the newest addition to Norwegian’s growing long-haul network from the UK. Low-cost flights from Gatwick to Boston will start in May 2016 with prices from just £179

Also in the third quarter, Norwegian received more international awards, including two Passenger Choice Awards. The company took delivery of five new aircraft, ordered two new Dreamliners and entered into an agreement to lease out 12 of its new Airbus A320neos, which will be delivered from 2016. Norwegian-subsidiary Arctic Aviation Assets Limited owns the aircraft and will be leasing them out for a period of 12 years. 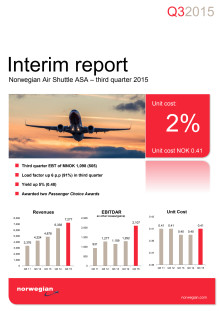