A total of 2,816,164 passengers chose to fly with Norwegian in March; 362,613 more passengers than the same period last year. The total traffic growth (RPK) increased by 48 percent, while the capacity growth (ASK) increased by 44 percent. The load factor was 86.7 percent, up 2.6 percentage points.

The period is influenced by the “Easter effect” as Easter was in March this year, consequently increasing traffic. We will therefore see the opposite effect for the April figures.

“Even though Easter strongly impacts this month’s figures, we have a solid passenger growth. The international growth continues, and at the same time, more people are flying with us in Scandinavia. Our low fares and extensive route offering attract more business and leisure passengers,” said CEO of Norwegian, Bjørn Kjos.

Norwegian operated 98.4 percent of the scheduled flights in March, where of 72.3 percent departed on time.

Norwegian’s fleet renewal program continues with full force in 2018. The company took delivery of three Boeing 787-9 Dreamliners in March. This year in total, Norwegian will take delivery of 11 Boeing 787-9 Dreamliners, 12 Boeing 737 MAX8 and two Boeing 737-800. With an average age of only 3.6 years, Norwegian’s fleet is one of the world’s “greenest” and most modern. 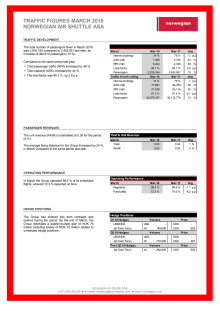