Increased demand from both business and leisure passengers contributed to Norwegian’s growth in March. The company carried almost 2.2 million passengers this month, an increase of 27 per cent compared to March last year. The load factor was 87.9 per cent, up 3.7 percentage points.

The March traffic figures are characterised by growth and higher load factor. However, it needs to be taken into account that the Scandinavian pilot strike in March 2015 affected the figures last year. In addition, the traffic growth is affected by the fact that Easter did not extend into April this year.

Norwegian's CEO, Bjørn Kjos said: “We are very pleased that an increasing number of travellers are choosing Norwegian, not least business travellers both on domestic routes in Scandinavia and European routes in general. More and more companies are realising it is possible to get quality flights at a low fare and are updating their travel policies to reduce costs without compromising quality. In addition, the response to our intercontinental offer continues to increase as we launch new routes and destinations.”

Norwegian’s fleet renewal program continues with full force in 2016 with 21 brand new aircraft entering the fleet. The company took delivery of three Boeing 737-800s from the factory in Seattle in March. With an average age of 3.6 years, Norwegian’s fleet is one of Europe’s newest and most environmentally friendly.

Norwegian operated 99.3 per cent of its scheduled flights in March, whereof 75.6 per cent departed on time.

Norwegian Air Shuttle ASA, commercially branded “Norwegian”, is a low-cost airline listed on the Oslo Stock Exchange. Norwegian is the world's seventh largest low-cost airline. The company reported its highest ever passenger figures in a single year with almost 26 million passengers in 2015. Norwegian has a route portfolio that stretches across Europe into North Africa and the Middle East, as well as long-haul flights to the US and Southeast Asia. The company has over 400 routes to more than 130 destinations and employs approximately 5,500 people. In 2013, 2014 and 2015, Norwegian was voted Europe’s best low-cost carrier of the year by the renowned SkyTrax World Airline Awards. Norwegian was also the first airline to be awarded the World's best low-cost long-haul airline in 2015 by SkyTrax. 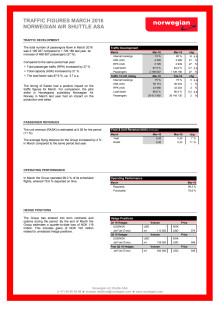