Norwegian reported its highest ever passenger figures in a single year with more than 37 million passengers and a load factor of 86 per cent in 2018. The launch of 35 new routes, the delivery of 25 brand new aircraft and a substantial increase of intercontinental traffic contributed considerably to the growth and a stronger global footprint. At the same time, 2018 was characterised by major investments, strong competition and a high oil price. Norwegian has implemented a series of cost-reduction measures to boost its financials in 2019.

During 2018, Norwegian took delivery of 25 brand new aircraft and launched 35 new routes, primarily between Europe and the U.S. South America was welcomed to our network with the launch of a direct route between London and Buenos Aires, as well as new domestic routes in Argentina. Norwegian also increased the number of frequencies on specific routes due to passenger demand, including our most popular routes operated to and from London Gatwick. As part of our planned global expansion the Norwegian group hired more than 2,000 new staff members.

Norwegian continued to receive several international customer awards in 2018, including two SkyTrax Awards: “Europe’s best low-cost carrier” for the sixth consecutive year and the “World's best low-cost long-haul airline” for the fourth year in a row. For the second time, Norwegian was named “The Most Fuel-Efficient Transatlantic Airline” by The International Council on Clean Transportation.

“The 2018 traffic figures demonstrate that our international footprint continues to grow stronger, in line with the Norwegian Group’s strategy. The company has made considerable investments this year and will now enter a period of slower growth.We have adjusted and optimised our route portfolio and the capacity going forward.We have also made seasonal adjustments for the winter,” Norwegian CEO Bjørn Kjos said.

“Continued tough competition, high oil prices and operational challenges in 2018 combined with the issues with Rolls Royce engines, which have particularly affected our long-haul operations, have had an impact on our financial results in the latter half of 2018. We have launched a series of cost-reduction measures to boost our financials in 2019 which will have an immediate and continued positive influence throughout the year.” Kjos added.

During the last period, Norwegian has hedged fuel for 2019. The company has an unrealised loss on this hedging today, which has been included in the 2018-results. Norwegian is therefore well positioned, when compared to other airlines, in regards to fuel hedging.

December 2018 was also characterised by passenger growth as Norwegian carried 2,402,005 passengers, up 15 per cent from the same month previous year. The capacity growth (ASK) was 34 percent and the traffic growth (RPK) was 24 per cent.

Norwegian operated 99.1 percent of its scheduled flights in December, of which 75.7 per cent departed on time. 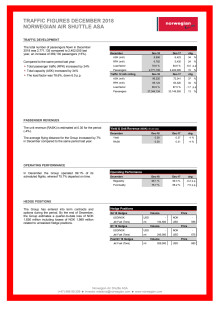