Norwegian reported its highest ever passenger figures in a single year with almost 30 million passengers and a load factor of 88 per cent in 2016. The launch of 34 new routes and a substantial increase of intercontinental traffic contributed considerably to the growth.

Passenger growth, more new aircraft and high load factors characterised 2016. The company carried almost 30 million passengers in 2016, 3.6 million more than the previous year. The company took delivery of 21 brand new aircraft and launched 34 new routes, mainly in the U.S., Spain and the UK. The 2016 load factor was 88 per cent, up from 86 per cent in 2015.

December 2016 was also characterised by passenger growth and a solid load factor. Norwegian carried 2,145,043 passengers in December, up 20 per cent from the same month last year. The capacity growth (ASK) in December was 29 per cent and the traffic growth (RPK) was 31 per cent. The load factor was 84.6 per cent, an increase of 1.3 percentage points.

Norwegian CEO Bjørn Kjos said: “The traffic figures show that our global strategy works and our competitiveness is strengthened. It is gratifying to see that more and more people choose to fly with us – our flights between Paris and several cities in the US, for example, have more or less been full. At the same time, our European and intercontinental routes complement each other as around 30 per cent of our passengers on the intercontinental routes also use our European network on the same journey.”

“December has been a busy travel month in particularly in Scandinavia, Europe and the U.S. Our Caribbean routes have been very well received, especially amongst American travellers who are flying from Boston, New York and Baltimore/Washington to the French Caribbean islands of Martinique and Guadeloupe,” Kjos continued.

Norwegian operated 99.2 percent of its scheduled flights in December, of which 69 per cent departed on time. 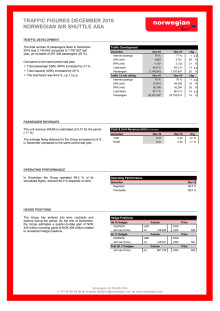