Norwegian reports a continued passenger growth and a record-high load factor of 88 percent for the month of June. The positive trend is a combination of solid growth on the long-haul operation and many sun-seeking Scandinavians during June.

Norwegian carried 2,463,239 passengers in June, an increase of 7 percent compared to the same month the previous year. The total passenger traffic (RPK) increased by 11 percent, while the capacity (ASK) increased by 4 percent this month. The load factor was 88 percent in June, up 5.5 percentage points from June last year.

“I’m pleased that so many choose to travel with Norwegian and that we can fill almost nine out of ten seats. We’re particularly happy with the development in our long-haul operation. At the same time, the weather has been in our favour as many Scandinavians have escaped the cold weather during the month of June,” said Norwegian’s CEO Bjørn Kjos

In June, Norwegian took delivery of a brand new Boeing 737-800. Norwegian boasts one of the most modern and environmentally friendly fleets in Europe. Norwegian scooped two renowned awards in June from the renowned SkyTrax World Airline Awards, the leading international airline rating system as voted on by the travelling public. Norwegian was named the ‘World’s Best Low-Cost Long-Haul Airline’ and ‘Best Low-Cost Airline in Europe’ for the third consecutive year. 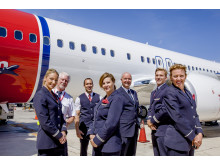 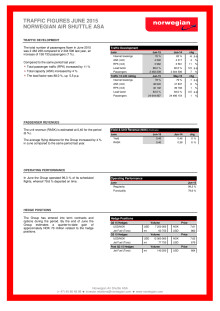