Norwegian carried 2.1 million passengers in April 2015, an increase of seven percent compared to the same month previous year. The load factor was 82.4 percent, up 2.6 percentage points.

Norwegian’s traffic figures for April are influenced by repercussions from the pilot strike in Scandinavia. In addition, this year’s Easter traffic was in March; last year it was in April. Norwegian carried 2,134,040 passengers in April, an increase of seven percent compared to the same month last year. The load factor was 82.4 percent in April, up 2.6 percentage points, which contributed to a positive total passenger traffic growth (RPK) of 14 percent. The capacity (ASK) increased by 11 percent this month. Norwegian took delivery of a brand new Dreamliner from the Boeing factory in April, which means that the long-haul fleet now consists of eight Dreamliner aircraft.

“The pilot strike in Scandinavia also had an impact on April’s traffic figures. But we are pleased that – in spite of this – the load factor is better than the same period last year. We are especially pleased that we continue to attract many new customers in Europe and USA, which proves that our international strategy works,” says CEO Bjørn Kjos. 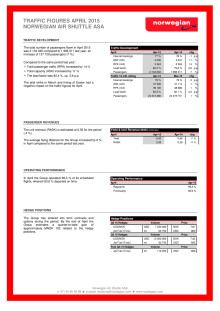