Norwegian today reported its first quarter results for 2017 with a result of -1.5 billion NOK. Despite strong passenger growth, higher fuel costs, tough competition and a stronger NOK contributed to the negative result. This year’s Easter led to a shift of income over to April, as last year’s Easter was in March. The company launched 39 new routes this quarter.

The net result was -1,492 million NOK, compared to -800 million NOK the same quarter previous year. The airline carried 6.7 million passengers in the first quarter, an increase of 14 per cent.Norwegian’s strongest growth was in the U.S., Spain and France. In the Nordics, the passenger growth was 6 per cent. The capacity growth was 24 per cent and the load factor was 84 per cent – marginally down in a quarter traditionally characterized by less demand and travel.

Norwegian’s global growth strategy will provide economies of scale and lower unit costs. During the first quarter, unit costs excluding fuel fell by 4 per cent and debt was cut by 1 billion NOK. Cash and cash equivalents at the end of the quarter was 4.8 billion NOK.

Norwegian CEO Bjørn Kjos said:“In this quarter, we particularly see the effects of higher fuel costs combined with a strengthened krone against the British pound, euro and Swedish krona, which accounts for almost half of our sales. In addition, the figures are affected by the fact that Easter was not in the first quarter, like last year. At the same time, we are filling aircraft and attracting more passengers both in new and more established markets. Our long-haul operation is now well established, proving that customers want affordable fares and new aircraft on intercontinental routes.”

Norwegian launched 39 new routes during the first quarter, including routes between the U.S. and Ireland, Northern Ireland, Scotland and Norway. During the first quarter of 2017, Norwegian took delivery of seven brand new Boeing 737-800 aircraft, as well as one Boeing 787-9 Dreamliner. In April the company announced three new intercontinental destinations from London Gatwick to Singapore, Denver and Seattle. 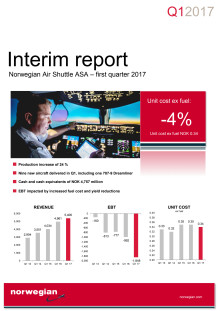