Norwegian (NAS) today reported its June traffic results. Nearly 1.6 million passengers flew with the company in June, up 9 percent compared to the same month previous year. June’s traffic figures are influenced by the strike among security guards at major airports in Norway.

Norwegian carried 1,583,735 passengers in June, up 9 percent compared to June previous year. In June 2011 and 2010, Norwegian reported strong passenger growth. However, due to the strike among the security guards at airports across Norway in June 2012, the company experienced a considerable passenger decline. The load factor was 77 percent, down 4 percentage points compared to June previous year.

Norwegian had an RPK growth of 15 percent and an ASK growth of 21 percent in June.

”We’re very pleased that more passengers chose to travel with Norwegian. However, the strike among the security guards at airports across Norway created a situation that strongly affected our passengers this month. We were expecting an impact of this in our traffic figures this month. We operated our schedule as usual but experienced a considerable passenger decline, both in the business and leisure segments,” said CEO Bjørn Kjos.

The company operated 99.6 percent of its scheduled flights this month, where of 86 percent departed on time. 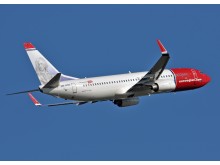 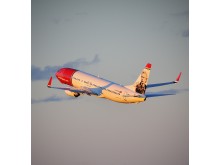 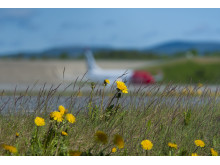 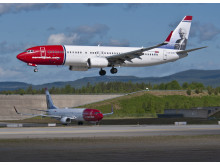 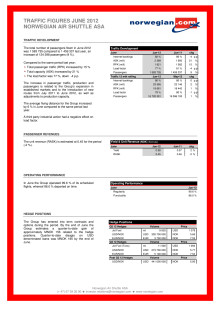