Norwegian’s October traffic figures are characterised by international growth, particularly on the long-haul routes, a trend the company has reported over the past months. The solid load factor continued this month and was 88 percent, up 6.2 percentage points from the same month previous year. The company carried approximately 2.4 million passengers in October, an increase of six percent.

The October traffic figures show a stable and positive development for Norwegian. Future bookings are good and the growth on long-haul routes - particularly out of London Gatwick - continues.

“This month is characterized by stable growth in the Scandinavian market, not least in Norway, where many have predicted a decline in passenger demand. When corporations need to save cost on employee travel, they look for high quality flights at a lower fare,” said CEO Bjørn Kjos. 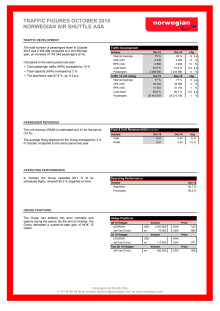