Norwegian (NAS) continues to report new passenger records. The July passenger figures are the highest in the company’s history and for the first time more than 2 million customers flew with the airline in a single month.

The traffic figures are influenced by the exceptionally good July weather in the Nordics, contributing to less demand for travel to The Mediterranean.

“I am pleased with this month’s traffic results. We continue to report good figures in our established markets; in addition, the response on routes out of our new European bases and on our long-haul operation has been very well received. The fact that more than two million passengers have chosen Norwegian in July proves that high quality at a low fare is appreciated,” said Norwegian’s CEO Bjørn Kjos.

The company operated 99.9 percent of its scheduled flights this month, whereof 85.4 percent departed on time. 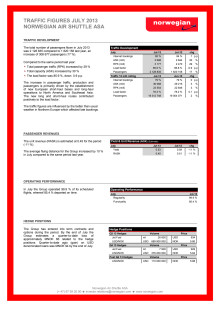