Norwegian carried more than 2.3 million passengers in August 2014, an increase of 19 percent compared to the same month previous year. The load factor was a solid 83.6 percent, up 4.4 percentage points.

Norwegian carried 2,344,253 passengers in August, an increase of 19 percent compared to the same month previous year. The total passenger traffic (RPK) increased by 44 percent, while the capacity (ASK) increased by 37 percent this month. The load factor was 83.6 percent, up 4.4 percentage points.

“We’re very pleased that more and more customers choose to fly Norwegian. Even with considerable capacity growth, the load factor increased by as much as 4.4 percentage points. The fact that an increasing number of customers outside of Scandinavia choose to fly with Norwegian, proves that our international strategy is working. The August figures are also influenced by major holiday traffic outside of Scandinavia, particularly out of the UK, where Norwegian has a considerable operation,” said CEO Bjørn Kjos. 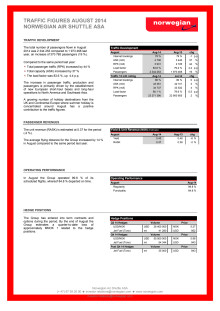