Norwegian reported its highest ever passenger figures in a single year with almost 24 million passengers in 2014, an increase of three million compared to 2013. Since the company’s first flight in 2002, 130 million passengers have traveled with Norwegian.

Last year was characterized by high capacity growth and high load factor. The load factor was 81 percent in 2014, up from 78 percent in 2013. In 2014 Norwegian renewed its fleet considerably, launched many new routes - both intercontinentally and within Europe. In addition, the company established new crew bases in the United States and Spain.

December 2014 was characterized by capacity increase, increased passenger figures and a solid load factor. Norwegian carried 1,635,596 passengers in December and the load factor was up 3.3 percentage points from the same month in 2013. The capacity growth (ASK) was 12 percent and the traffic growth (RPK) was 17 percent.

“Three million more passengers chose to fly with us in 2014 compared with the previous year and the total number of passengers reached 24 million. We have welcomed an increasing number of new customers on board. Not least in new markets outside Scandinavia, many have tried Norwegian for the first time, liked our product and returned on their next journey. This makes us better equipped to meet increasing international competition. England, USA and Spain are examples of markets with large customer volumes where growth boosts future competitiveness, which in turn secures jobs at Norwegian," said CEO Bjorn Kjos.

“It is also gratifying that Norwegian has received a number of important customer awards throughout the year. In December we see an increased desire to travel during Christmas, which contributes positively to the traffic figures. I am particularly pleased that the load factor has increased both in December and for the whole year,” said Kjos.

Norwegian Air Shuttle ASA, commercially branded “Norwegian”, is a low-cost airline listed on the Oslo Stock Exchange. Norwegian is the second largest airline in Scandinavia and third largest low cost carrier in Europe. More than 20 million passengers fly on its network per year. Norwegian has a route portfolio that stretches across Europe into North Africa and the Middle East, as well as long-haul flights to the US and Southeast Asia. The company has a total of 421 routes to 129 destinations and employs approximately 4,500 people in Norway, Sweden, Denmark, Finland, Estonia, UK, Spain and Thailand. The company has 258 undelivered aircraft on firm order. Norwegian was founded in 1993 and its headquarter is in Fornebu, Norway. In 2013 and 2014, Norwegian was voted Europe’s best low-cost carrier of the year by the renowned SkyTrax World Airline Awards. Norwegian offers better leg room than most competitors, in-flight WiFi, world-class punctuality and a fleet of 102 aircraft with an average age of only 4.8 years. 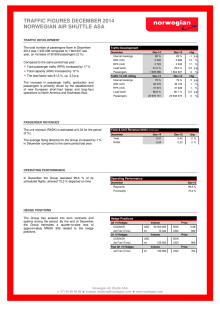