Continued passenger growth and solid load factors were the key factorsin Norwegian’s September traffic figures. More than 2.4 million customers flew with the airline this month. The load factor was 88.2 percent and long-haul operations contributed considerably to the positive traffic figures.

Norwegian carried 2,435,240 passengers in September, an increase of 9 percent compared to the same month previous year. The total passenger traffic (RPK) increased by 11 percent while the capacity (ASK) increased by 3 percent this month. The load factor was 88.2 percent, up 6.8 percentage points from the same month last year.

Along with increased passenger numbers, September was also marked by new aircraft and further award wins for Norwegian. The company took delivery of three brand new Boeing 737-800 aircraft in September, of a total of ten in 2015. With an average age of about four years, Norwegian’s fleet is among the most modern and environmentally friendly in Europe. In September, Norwegian was awarded the best airline in Europe by renowned Passenger Choice Awards.

“Norwegian´s long-haul operation continues to make a positive contribution to our growth, with 96 percent of the seats filled in September. We also see that an increasing number of passengers are taking advantage of our extensive European network to connect onwards to the US or Thailand. This shows the excellent links and travel opportunitiesthat a seamless long- and short-haul operation can create. The fact that we once again receive new international recognition proves that travelers all over the world appreciate Norwegian,” said CEO Bjørn Kjos.

Norwegian operated 99.8 percent of its scheduled flights in September, with 84.3 percent departing on time. 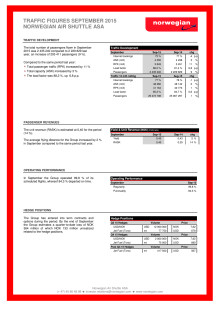