Norwegian (NAS) carried more than 1.9 million passengers in September, an increase of 17 percent compared to the same month previous year. The company is growing and increasing its capacity by taking delivery of brand new aircraft, establishing new operational bases outside Scandinavia and introducing new routes within Europe and between Scandinavia and the U.S. and Asia.

The airline carried 1,920,329 passengers in September, an increase of 272,627 passengers (17 percent) compared to September 2012. The total capacity (ASK) increased by 33 percent and the passenger traffic (RPK) increased by 30 percent. The load factor was 78.3 percent, down 1.7 percentage point from the same month last year.

The traffic figures are influenced by strong capacity growth, new aircraft entering the fleet; the establishing of operational bases outside Scandinavia; the launch of several new routes within Europe and long-haul routes between Scandinavia and the U.S. and Asia. In addition, the flying distance is longer than before.

“I am pleased that more and more passengers choose to fly Norwegian. Our load factor remains stable and high, despite strong capacity growth. When entering new markets we are conscious about making our brand known by offering very low fares in order to attract new customers. We know that passengers tend to return once they’ve experienced our new aircraft and in-flight service,” said Norwegian’s CEO Bjørn Kjos.

The company operated 99.6 percent of its scheduled flights this month, whereof 89.3 percent departed on time. 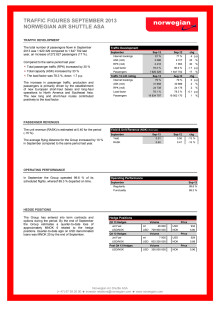