Norwegian (NAS) today reported a result (EBT) of 1.6 billion NOK (£149 million) for the third quarter 2018. The company continued to reduce its unit costs despite a capacity growth of 33 per cent. Going forward, the growth will abate, consequently further reducing unit cost.

The net profit for the third quarter was 1.3 billion NOK (£121 million), an improvement of 18 per cent compared to the same quarter last year. The company's unit costs excluding fuel have decreased by 10 per cent this quarter. The total revenue increased by 33 per cent to 13.4 billion NOK (£1.2 billion). In total, approximately 11 million passengers chose to travel with Norwegian in the third quarter - an increase of 11 per cent. The load factor remained high at 90.5 per cent compared to 91.7 per cent last year.

Norwegian has made significant investments in recent years, with the establishment of new bases internationally and in new markets; recruitment of several thousand employees - primarily pilots and cabin crew - the launch of many new routes and increase of frequencies on well-established routes. The strong international footprint has for instance contributed to the United States now representing the largest market after Norway in terms of total revenue.

"I am very pleased to present a solid result this quarter with a reduced unit cost despite strong growth. Going forward the growth will slow down, and we will begin to reap the large investments we have made over the years, which will benefit customers, employees and shareholders. However, there is no doubt that tough competition, high oil prices and a strong dollar will affect the entire aviation industry, making it even more important to further streamline our operations and continue to reduce costs," said CEO Bjørn Kjos of Norwegian.

Norwegian has one of the world's youngest and most modern aircraft fleets with an average age of 3.7 years. Thanks to the young fleet, the company has reduced its emissions per passenger by 30 per cent since 2008. It has also been named the most environmentally friendly airline on transatlantic routes by The International Council of Clean Transportation, an international and independent environmental institute.

"The report by the International Council of Clean Transportation confirms that our investment in the latest technology available on the market is the single most important environmental measure an airline can undertake. New aircraft are win-win for the environment, the passengers and the company’s costs,” Kjos continued. 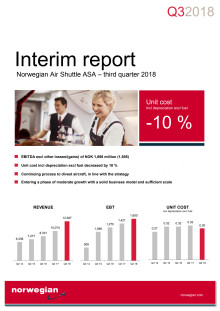