Norwegian (NAS) today reported its fourth quarter and full year results for 2013. The company reports a pre-tax profit (EBT) of 437 MNOK. The company’s total fourth quarter result was -283 MNOK. The year has been characterized by strong passenger growth and international expansion, and additional costs related to the start-up of the long-haul operation.

2013 is the seventh consecutive year Norwegian has made a profit. Earnings before taxes (EBT) were 437 MNOK in 2013, compared to 623 MNOK in 2012. The turnover was 15.6 billion NOK, an increase of 21 percent. The production growth (ASK) increased by 32 percent in 2013. At the same time, the load factor remains stable and high. Norwegian carried 20.7 million passengers in 2013, three million more than the previous year. At the same time, the market share is growing in all core markets.

Fourth quarter 2013
The company’s total turnover for the fourth quarter was 3.8 BNOK, an increase of 22 percent from the same quarter previous year. The pre-tax profit (EBT) was -283 MNOK, compared to 23 MNOK the year before. The airline carried 5.25 million passengers during the fourth quarter, which represents a passenger growth of 20 percent. At the end of the year, the ASK was up 41 percent and the load factor increased by one percentage point.

“We have had significant and unexpected costs due to the start-up of the long-haul operation, with delayed deliveries of aircraft and many technical issues. Furthermore, the profit has also been affected by a weaker Norwegian krone. However, it is clear that our business model works and is in line with our strategy. Cash flow from operations has been very strong. We have cut costs and added new capacity, while at the same time maintaining the load factor. Strong competition on certain routes affects the price level, but Norwegian is still better equipped than ever to meet the competition," said Norwegian’s CEO Bjørn Kjos.

Norwegian Air Shuttle ASA, commercially branded “Norwegian”, is a low-cost airline listed on the Oslo Stock Exchange. Norwegian is the second largest airline in Scandinavia and third largest low cost carrier in Europe. More than 20 million passengers fly on its network per year. Norwegian has a route portfolio that stretches across Europe into North Africa and the Middle East, as well as long-haul flights to the US and Southeast Asia. The company has a total of 413 routes to 128 destinations and employs approximately 3,500 people in Norway, Sweden, Denmark, Finland, Estonia, UK, Spain and Thailand. The company has 258 undelivered aircraft on firm order. Norwegian was founded in 1993 and its headquarter is in Fornebu, Norway. In 2013, Norwegian was voted Europe’s best low-cost carrier of the year by the renowned SkyTrax World Airline Awards. Norwegian offers better leg room than most competitors, in-flight WiFi, world-class punctuality and a fleet of 89 aircraft with an average age of only 4.8 years. 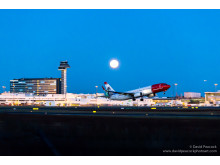 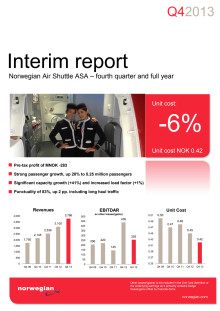