Norwegian carried more than 2.1 million passengers in January, an increase of 20 percent compared to the same month previous year. The growth is primarily driven by international expansion; the routes between the UK and the US, as well as the domestic routes in Spain are contributing strongly to the growth. The load factor was 83 percent, an increase of 1.3 percentage points.

A total of 2,110,576 passengers chose to fly with Norwegian in January, 353,920 more than the same period last year. The total traffic growth (RPK) increased by 30 percent, while the capacity growth (ASK) increased by 28 percent.

“We are very pleased to see that the traffic growth continues in January, a month traditionally characterized by less travel. The global expansion continues with strong growth on domestic routes Spain as well as flights between the US and the UK,” said CEO of Norwegian, Bjørn Kjos. 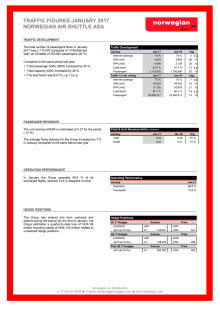