A total of 2,766,743 chose to fly with Norwegian in October. This is 380,837 more passengers than the same period last year. The total traffic growth (RPK) increased by 24 per cent, while the capacity growth (ASK) increased by 23 per cent.

Norwegian CEO Bjørn Kjos said: “We are very pleased to see that more customers choose to fly with Norwegian and that the positive development continues in all markets. Our long-haul routes are more or less full, which proves that customers on both sides of the Atlantic appreciate high quality and low fares.”

Norwegian operated 99.6 per cent of the scheduled flights in October, whereof 79.5 per cent departed on time.

Norwegian’s fleet renewal program continues with full force in 2016. So far this year, Norwegian has taken delivery of 20 brand new aircraft; 16 Boeing 737-800s and four Boeing 787-9. The company took delivery of one Boeing 737-800 and one 787-9 Dreamliner in October. With an average age of only 3.6 years, Norwegian’s fleet is one of the world’s “greenest” and most modern. 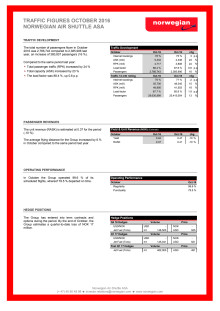