Norwegian carried almost 2.3 million passengers in November, an increase of 16 per cent compared to the same month previous year. Norwegian’s long-haul routes had a 70 per cent passenger growth. The overall load factor was 84 per cent, an increase of one percentage point.

A total of 2,265,145 passengers chose to fly with Norwegian in November. This is 313,062 more passengers than the same period last year. The total traffic growth (RPK) increased by 31 per cent, while the capacity growth (ASK) increased by 29 per cent.

Norwegian CEO Bjørn Kjos said: “We are very pleased that both new and loyal customers choose to fly with Norwegian. Our transatlantic growth will continue now that the U.S. Department of Transportation has finally given our EU carrier a permit to fly to and from the U.S. This means that Norwegian can continue its global expansion with full force and open new destinations all over the world. The approval also means that we can create more jobs in Europe and the U.S., as well as contributing to local economies through increased tourism."

Norwegian operated 99.7 per cent of the scheduled flights in November, of which 73.5 per cent departed on time. 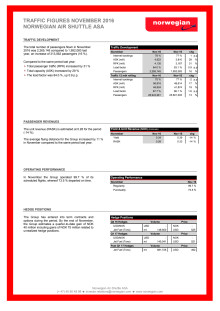