Norwegian carried more than 2.3 million passengers in January, an increase of 11 percent compared to the same month previous year. The growth is primarily driven by international expansion; with a 55 percent growth, the intercontinental routes constitute the highest share.

A total of 2,333,932 passengers chose to fly with Norwegian in January - 223,356 more passengers than the same period last year. The total traffic growth (RPK) increased by 29 percent, and the capacity growth (ASK) increased by 30 percent. The load factor was 82 percent, down one percentage point.

“We are very pleased with the continued passenger growth in January, a month traditionally characterized by less demand. The global expansion continues with the strongest growth on routes between Europe and the U.S. This winter, we once again offer flights between the U.S. East Coast and the French Caribbean islands of Martinique and Guadeloupe, enabling better fleet utilization during the low season in Europe said CEO of Norwegian, Bjørn Kjos.

Norwegian operated 98.9 percent of the scheduled flights in January, whereof 72.4 percent departed on time. The on-time performance was heavily influenced by the weather situation in Oslo, London and New York. 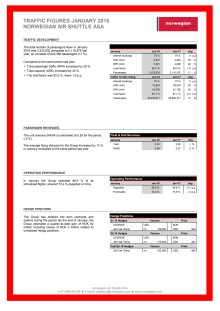