Norwegian passengers have donated a total of three million dollars (£2.3 million) since a donation option was introduced to the booking process in July 2015.

Within its first year, the new donation option raised more than $720,000 and in July 2018 Norwegian introduced onboard donations in the personal in-flight entertainment system on its Boeing 787 Dreamliner fleet. UK passengers are among the top donors with those travelling to New York donating the most to UNICEF.

Norwegian and UNICEF have had a partnership since 2007. Since then the airline has supported saving hundreds of thousands of lives through various initiatives, which also includes its Fill a Plane campaigns. Five humanitarian aid flights have been carried out since 2014 which have brought tons of emergency aid to the Central African Republic; the world’s second-largest refugee camp, Za’atari in Jordan; Mali; to Djibouti for Yemen; and last year, to Chad.

As part of the booking process customers can choose to donate £3, £5, £10 or £15, which goes directly to UNICEF. As a result of these donations:

Bjørn Kjos, Norwegian CEO said: “I would like to personally thank all our wonderful customers for their generosity. Their donations help UNICEF ensure that even more children around the world get access to the future they deserve. When it is this easy to donate, we notice that many more contribute to such a great cause.”

Camilla Viken, UNICEF Norway CEO said: “This is a way of contributing that doesn’t require much but can mean the difference of life and death for those who receive it. On behalf of UNICEF and children around the world, we would like to thank Norwegian’s customers for their caring and contribution. This means so much, and it is great to see both new and old passengers continuing to contribute. This way, we will save thousands of children’s lives.”

Passengers flying out of London Gatwick are the third biggest donators to UNICEF after Norway and Sweden. While the most generous per donation are the Danish.

Top 10 routes where passengers have donated the most to UNICEF during their booking process:

Last year, nine Norwegian employees also raised more than $50,000 by representing the airline and UNICEF during the NYC Marathon. This year, another group of employees will do the same.

The airline operates a young and therefore more environmentally friendly aircraft fleet with an average age of just 3.8 years. The International Council on Clean Transportation (ICCT) has voted Norwegian the most fuel-efficient airline on Transatlantic routes for two consecutive years which further demonstrates the airline’s commitment to reducing carbon emissions. 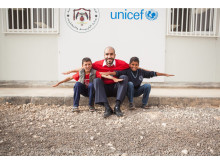