Love was in the air today at London Gatwick as passengers on the inaugural got to enjoy a Valentine’s Day themed departure gate celebration as they headed to the ‘Paris of South America’. Passengers were surprised with a tango performance as well as learning a few steps for themselves, meaning they could tango their way to Buenos Aires!

Norwegian CEO Bjorn Kjos said: “Today we have marked the start of our new expansion into South America by bringing a taste of Argentina to London Gatwick. I am delighted to bring our high quality long-haul flights to another continent as we launch the only direct flight from London Gatwick to Buenos Aires, giving leisure and business passengers affordable access to South America.

“Our first flight to Buenos Aires from the UK marks another milestone for Norwegian. As our first South American route takes off, it is also a first step towards ambitious plans for international and domestic growth in Argentina, ahead of flights to Chicago and Austin from London Gatwick next month.”

Gatwick Airport CEO Stewart Wingate said: “The launch of Norwegian’s first ever South American route is another exciting landmark in Gatwick’s ongoing mission to connect the UK to more and more long-haul destinations. The airport now offers 63 long-haul connections – with many, including Buenos Aires, operated by low-cost carriers – making Gatwick the busiest departure airport for low-cost long-haul services in the world.

“We’re going to continue breaking new ground this year and remain focused on strengthening Gatwick’s global reach at a time when worldwide connections are crucial for the UK. In fact, two new Norwegian routes to Austin and Chicago will follow the Buenos Aires service into Gatwick’s schedules next month alone.”

“In the past two years the capacity for international flights connecting Argentina to the world has risen by 21%, contributing to a boost of foreign tourists from 5.9 to 6.7 million. This new flight is another step towards our target of 9 million visitors by 2020 (set by the Argentine Ministry of Tourism) as Norwegian’s growth plans for international and domestic flights from Argentina take-off.”

Norwegian’s long-haul flights from London Gatwick are exclusively operated by a fleet of brand new Boeing 787 Dreamliner aircraft. Passengers can enjoy a spacious, modern economy cabin with seatback inflight entertainment and fares from £259.90 one way to Buenos Aires.

A new extended Premium cabin is being introduced with 60% more seats for passengers wanting an enhanced experience. The new 56 seat cabin configuration will offer passengers more than a metre of legroom, complimentary meal service, generous baggage allowance and airport lounge access, with Premium fares available from £699.90 one way.

Buenos Aires will be Norwegian’s 11th route launched from London Gatwick in the past four years and by the end of March, Norwegian will become the second largest long-haul airline at Gatwick with 13 direct long-haul routes following the launch of Singapore in September, Buenos Aires in February and Chicago and Austin in March 2018.

Norwegian carries more than 5.8 million UK passengers each year to over 50 global destinations. The airline has one of the youngest aircraft fleets in the world with an average age of 3.6 years, and more than 200 new aircraft on order. Norwegian was awarded the ‘World's best low-cost long-haul airline’ for the third consecutive year at the SkyTrax World Airline Awards.

Fares are based on the lowest available fare per person and include all mandatory taxes and charges. 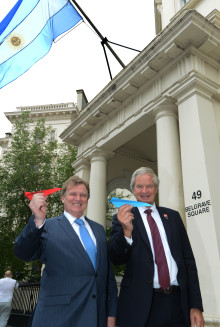 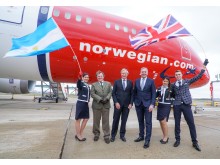